Goodbye, I look to the sky, Wherever I'm going it's alllright!

"Don't cry because it's over. Smile because it happened.” - Dr. Seuss

Is the search over?  Finding that the treasure is diificult to grasp.  The heart wavers if this is the dream or a beautiful reality.  So many expectations of others set aside to reach an impossible goal...And yet watching the Oilers win yesterday shook the clouds from my eyes and made me resolute...Whereever I'm going it's Alright 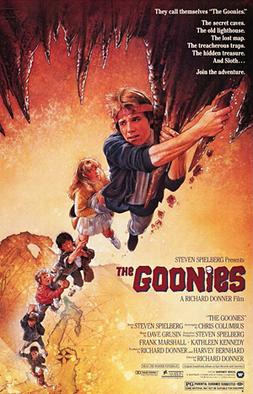 The Goonies, a group of young pre-teenaged friends living in Astoria, Oregon, face foreclosure on their families' homes from the expanding Astoria Country Club. On one of their last days their morale sinks particularly low due to the cancellation of their planned farewell road trip due to Mikey's older brother having failed his driver's license exam. While rummaging through the Walshes' attic, they find an old newspaper clipping, a Spanish map, and an artifact relating to a rumor of a forgotten pirate treasure somewhere in the area. Hearing the call of adventure, Mikey tries to persuade his friends to join him in search for the treasure hoarded by a pirate named One-Eyed Willie. Initially reluctant, the group eventually decides to usurp the authority of Mikey's older brother, Brandon, and escape for one last "Goonie adventure."

They head to the coast and stumble upon an abandoned seaside restaurant that seems to match coordinates set by the map and an old doubloon, unaware that the Fratellis, a family of Italian criminals, is using the restaurant to counterfeit money. After first encountering the family, the Goonies come back after the Fratellis have left and discover their criminal intents, and send Chunk, the clumsy, heavy-set liar of the group, to get help. However, the Fratellis return before they can leave, forcing the Goonies to use a cavern underneath the restaurant to escape. Chunk is captured and placed in the same room with the forsaken and deformed Fratelli brother, Sloth, while the rest of the Fratellis find the same caverns and follow the Goonies.

As the Goonies traverse the cavern, Mikey discovers that it matches up with map, and convinces the rest of the group to continue to follow it to find the treasure. They overcome many deadly traps set by One-Eyed Willie, and eventually arrive at a large underground cave with Willie's ship, The Inferno afloat inside it. While others begin to fill their pockets with the riches on the ship, Mikey finds Willie's skeleton, and reverently acknowledges him as the "first Goonie", leaving part of treasure with it as tribute. However, as the Goonies exit the hold, they are caught by the Fratellis, who take all their treasure and force the kids to walk the plank. The Goonies are saved by the timely arrival of Chunk and Sloth, now close friends, who help the rest of the group to shore. With the children no longer a threat, the Fratellis ransack the rest of the ship, including the share of the treasure Mikey left for Willie. This sets off a final booby trap, causing the cave to start to collapse. The Goonies and the Fratellies manage to escape through a hole in the cave, finding themselves near a beach. A passing policeman on an ATV spots them and calls in for help.

The Goonies are soon reunited with their parents, while the Fratellis are arrested; Chunk offers to take Sloth in to his home. As Mikey considers this their last adventure, Rosalita, a Hispanic maid, discover that Mikey's marble bag contains a large handful of jewels taken from the Inferno, and Mikey's dad quickly estimates that its value is more than enough to save everyone's homes. As the families celebrate, they spot the Inferno, now free of the cave, sailing away on its own.