Me and Vishnu and Jesus are Capricorns!  I am a Capricorn with Leo Ascendant and my Venus sign is in Aquarius.  It is fascinating stuff to be superstitiious but it might be right.  It's certainly fun to play with it.  I watched the Junos and Along with my love of Russell Peters I have started a semi-love affair with City and Colour.  I add them to the Bedouin Soundclash and Death Cab for Cutie love affair group.  I've also been listening to a lot of Newsboys, Five For Fighting and U2 recently and staring at the latina from Pussy Cat Dolls as she dances in a Sari for Jai Ho.  I have a sari fetish...ok I admit it. Baila! Baila!  When the RSS feed of my livejournal goes to my facebook unfortunately it doesn't transfer over with my embed code.  So I'll Post the link too.

On a more personal note I will be having my knee reconstructed tomorrow and I'm a little Anxious but I think it will be alright except for being gimped up for 9 months.  C'est La Vie C'est Ca...Je Ne Sais pas pour quoi!

Capricorn may refer to:

Capricorn may also be:

Capricornus (pronounced /ˌkæprɨˈkɔrnəs/, genitive Capricorni /ˌkæprɨˈkɔrnaɪ/) is one of the constellations of the zodiac; it is often called Capricorn, especially when referring to the corresponding astrological sign. Its name is Latin for "horned male goat" or "goat horn", and it is commonly represented in the form of a sea-goat: a mythical creature that is half goat, half fish. Its symbol is (Unicode ♑).

Capricornus is one of the 88 modern constellations, and was also one of the 48 constellations listed by the 1st century astronomer Ptolemy. Under its modern boundaries it is bordered by Aquila, Sagittarius, Microscopium, Piscis Austrinus and Aquarius. The constellation is located in an area of sky called the Sea or Water, consisting of many water-related constellations such as Aquarius, Pisces and Eridanus. 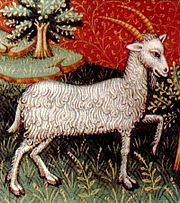 A Capricorn from a 15th century book

Capricorn is the tenth astrological sign in the Zodiac, originating from the constellation of Capricornus. In western astrology, this sign is no longer aligned with the constellation as a result of the precession of the equinoxes. In astrology, Capricorn is considered a "feminine", negative (introvert) sign.[2] It is also considered an earth sign and one of the four cardinal signs. Capricorn is ruled by the planet Saturn. Being the tenth sign of the zodiac, Capricorn has been associated with the astrological tenth house.

Individuals born when the Sun was in this sign are considered Capricorn individuals. Under the tropical zodiac, the Sun is enters Capricorn by definition at the moment of winter solstice, or roughly at December 22, and leaves it around January 19. Under the sidereal zodiac, it is currently there roughly from January 15 to February 15. The Sanskrit name of Capricorn in Hindu astrology is Makara.

Based on Elements within the Zodiac, Capricorn is considered compatible with Taurus [3] and Virgo. [3]

There are many variables that determine compatibility in astrology, such as birth dates, birth months, birth years, position of a sign within the Sun, the Moon, Stars, etc. The signs listed as compatible with Capricorn do not reflect an individual profile or individual reading as interpreted within astrology, but rather reflect a general guideline and reference to compatibility as dictated by variables such as Qualities and Elements within the Zodiac. [3] The branch of astrology dealing with interpersonal compatibilities is called Synastry.

Dull as dirt,
You can't assert
The kinda light that might persuade
A strict dictator to retire
Fire the army,
Teach the poor origami.
The truth is in,
The proof is when you hear your heart start asking
What's my motivation?
And try as you may
There is no way
To explain the kinda change
That'd make an eskimo renounce fur
That'd make a vegetarian barbeque hamster
Unless you can trace this about-face to a certain Sign

Shine.
Make'em wonder whatcha got.
Make'em wish that they were not
On the outside looking bored.
Shine.
Let it shine before all men.
Let em see good works and then
Let em glorify the lord.

Out of the shaker and onto the plate,
It isn't karma it sure ain't fate
That would make a deadhead sell his van
That would make a schizophrenic turn in his crayons
Oprah freaks
And science geeks
A rationale that shall excuse this strange behavior
when you let it Shine
You will inspire the kind of entire turnaround
That would make a bouncer take ballet
Even bouncers who are unhappy
But out of the glare
With nowhere to turn
You ain't gonna learn it on "What's my Line?"

Shine.
Make'em wonder whatcha got.
Make'em wish that they were not
On the outside looking bored.
Shine.
Let it shine before all men.
Let em see good works and then
Let em glorify the lord.