Quaecumque Vera - WhatsoEver is True - Let it Be - Amen

WhatsoEver is true Lord, may I know it.  Eliminate my blind eyes!  Give me the sight to escape the madness.  May my actions be pure, my heart true.  For your judgment, and guidance I long.  As each day passes I marvel at your glory and goodness.  Please extinguish the Fire which engulfs our poor world.  I apologize for my sins and beg forgiveness and your love. Amen

It burns, my thirst
For knowledge, for Love
To win, To be First
Like a bounty, treasure trove
Yet it is a faulty race
That gives mind and heart a dour face
Seek only truth dear friend!
For it is where Love and Knowledge's River Ends
Faithful in Servitude

My dearest God, I am sorry for my flighty desires.  How I wish to supplant your throne like Lucifer, to be equal.  And yet I am just and more happy to beg on bended knee to ask for guidance.  To worship you is divine my lord!  I dream about your touch, your love, your approval with each waking breath.  Part of my life I denied your power and your prophets.  Please accept my solemn apology. I beg once again with my daily prayers your guidance. Amen
Cruxifiction

He died so my faith would bloom
To bring Heaven's light to Earth's gloom
Oh the heart of a denier I had!
Each day of denial was driving me mad
Accept him my heart cried, but my wicked mind lied
Heaven's eyes wept, for this lost child
And with each tear my heart would grow
For on that cross did all God's love glow
So that with his blood, for us a bright tomorrow

Good Friday, also called Holy Friday, Black Friday, or Great Friday, is a religious holiday observed primarily by adherents to Christianity commemorating the crucifixion of Jesus and his death at Golgotha. The holiday is observed during Holy Week as part of the Paschal Triduum on the Friday preceding Easter Sunday, and often coincides with the Jewish observance of Passover.

Based on the scriptural details of the Sanhedrin Trial of Jesus, the Crucifixion of Jesus was most probably on a Friday. The estimated year of Good Friday is AD 33, by two different groups, and originally as AD 34 by Isaac Newton via the differences between the Biblical and Julian calendars and the crescent of the moon.[1][2][3][4][5][6]

Main articles: Passion (Christianity), Crucifixion of Jesus, and Sayings of Jesus on the cross 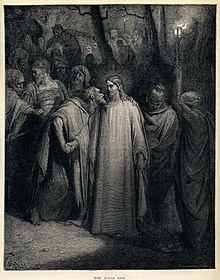 According to the New Testament, Jesus was arrested in the Garden of Gethsemane by the Temple Guards through the guidance of his disciple, Judas Iscariot. Judas received money (30 pieces of silver) (Matthew 26:14-16) for betraying Jesus and told the guards that whomever he kisses is the one they are to arrest. Jesus is brought to the house of Annas, who is the father-in-law of the current high priest, Caiaphas. There he is interrogated with little result, and sent bound to Caiaphas the high priest, where the Sanhedrin had assembled (John 18:1-24).

Conflicting testimony against Jesus is brought forth by many witnesses, to which Jesus answers nothing. Finally the high priest adjures Jesus to respond under solemn oath, saying "I adjure you, by the Living God, to tell us, are you the Anointed One, the Son of God?" Jesus testifies in the affirmative, "You have said it, and in time you will see the Son of Man seated at the right hand of the Almighty, coming on the clouds of Heaven." The high priest condemns Jesus for blasphemy, and the Sanhedrin Trial of Jesus concurs with a sentence of death (Matthew 26:57-66). Peter also denies Jesus three times during the interrogations. Jesus already knew that Peter would deny him three times. See the article Sanhedrin Trial of Jesus regarding the two trials, one at night, the other in the morning and how their timing may affect the day of Good Friday.

A Good Friday procession in Bombay by Indian Roman Catholics, depicting the Way of the Cross

In the morning, the whole assembly brings Jesus to the Roman governor Pontius Pilate, under charges of subverting the nation, opposing taxes to Caesar, and making himself a king (Luke 23:1-2). Pilate authorizes the Jewish leaders to judge Jesus according to their own Law and execute sentencing; however, the Jewish leaders reply that they are not allowed by the Romans to carry out a sentence of death (John 18:31).

Pilate questions Jesus, and tells the assembly that there is no basis for sentencing. Upon learning that Jesus is from Galilee, Pilate refers the case to the ruler of Galilee, King Herod, who was in Jerusalem for the Passover Feast. Herod questions Jesus but receives no answer; Herod sends Jesus back to Pilate. Pilate tells the assembly that neither he nor Herod have found guilt in Jesus; Pilate resolves to have Jesus whipped and released (Luke 23:3-16).

It was a custom during the feast of Passover for the Romans to release one prisoner as requested by the Jews. Pilate asks the crowd who they would like to be released. Under the guidance of the chief priests, the crowd asks for Barabbas, who had been imprisoned for committing murder during an insurrection. Pilate asks what they would have him do with Jesus, and they demand, "Crucify him" (Mark 15:6-14). Pilate's wife had seen Jesus in a dream earlier that day; she forewarns Pilate to "have nothing to do with this righteous man" (Matthew 27:19).

Pilate has Jesus flogged, then brings him out to the crowd to release him. The chief priests inform Pilate of a new charge, demanding Jesus be sentenced to death "because he claimed to be God's son." This possibility filled Pilate with fear, and he brought Jesus back inside the palace and demanded to know from where he came (John 19:1-9). 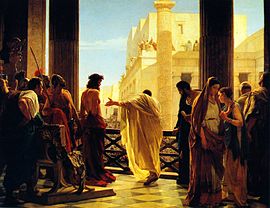 Coming before the crowd one last time, Pilate declares Jesus innocent, washing his own hands in water to show he has no part in this condemnation. Nevertheless, Pilate hands Jesus over to be crucified in order to forestall a riot (Matthew 27:24-26). The sentence written is "Jesus of Nazareth, King of the Jews." Jesus carries his cross to the site of execution (assisted by Simon of Cyrene), called the place of the Skull, or "Golgotha" in Hebrew and in Latin "Calvary". There he is crucified along with two criminals (John 19:17-22).

Jesus agonizes on the cross for six hours. During his last 3 hours on the cross, from noon to 3pm, there is darkness over the whole land.[7] With a loud cry, Jesus gives up his spirit. There is an earthquake, tombs break open, and the curtain in the Temple is torn from top to bottom. The centurion on guard at the site of crucifixion declares, "Truly this was God's Son!" (Matthew 27:45-54)

Joseph of Arimathea, a member of the Sanhedrin and secret follower of Jesus, who had not consented to his condemnation, goes to Pilate to request the body of Jesus (Luke 23:50-52). Nicodemus, which had also became a secret follower of Christ, brought about a hundred pound weight mixture of spices and helped wrap the body of Christ (John 19:39-40). Pilate asks confirmation from the centurion whether Jesus is dead (Mark 15:44). A soldier pierced the side of Jesus with a lance causing blood and water to flow out (John 19:34), and the centurion informs Pilate that Jesus is dead (Mark 15:45).

Joseph of Arimathea takes the body of Jesus, wraps it in a clean linen shroud, and places it in his own new tomb that had been carved in the rock (Matthew 27:59-60) in a garden near the site of crucifixion. Another secret follower of Jesus and member of the Sanhedrin named Nicodemus (John 3:1) also came bringing 75 pounds of myrrh and aloes, and places them in the linen with the body of Jesus, according to Jewish burial customs (John 19:39-40). They rolled a large rock over the entrance of the tomb (Matthew 27:60). Then they returned home and rested, because at sunset began Shabbat (Luke 23:54-56). On the third day, Sunday, which is now known as Easter Sunday (or Pascha), Jesus rose from the dead.

Uhh,
Hit them with a little ghetto gospel

[Chorus - Elton John:]
Those who wish to follow me (my ghetto gospel)
I welcome with my hands
And the red sun sinks at last into the hills of gold
And peace to this young warrior without the sound of guns

[2Pac]
If I could recollect before my hood days
I'd sit and reminisce, thinking of bliss of the good days
I stop and stare at the younger, my heart goes to 'em
They tested, it was stress that they under
And nowadays things changed
Everyone's ashamed to the youth cause the truth looks strange
And for me it's reversed, we left them a world that's cursed, and it hurts
'cause any day they'll push the button
and you all condemned like Malcolm X and Bobby Hunton, died for nothing
Don't them let me get teary, the world looks dreary
but when you wipe your eyes, see it clearly
there's no need for you to fear me
if you take your time to hear me, maybe you can learn to cheer me
it ain't about black or white, cause we're human
I hope we see the light before its ruined
my ghetto gospel

[2Pac]
Tell me do you see that old lady ain't it sad
Living out a bag, but she's glad for the little things she has
And over there there's a lady, crack got her crazy
Guess she's given birth to a baby
I don't trip and let it fade me, from outta the frying pan
We jump into another form of slavery
Even now I get discouraged
Wonder if they take it all back while I still keep the courage
I refuse to be a role model
I set goals, take control, drink out my own bottles
I make mistakes, I learn from everyone
And when it's said and done
I bet this Brother be a better one
If I upset you, don't stress
Never forget, that God hasn't finished with me yet
I feel his hand on my brain
When I write rhymes, I go blind, and let the lord do his thang
But am I less holy
'cause I choose to puff a blunt and drink a beer with my homies
Before we find world peace
We gotta find peace and end the war on the streets
My ghetto gospel

[2Pac]
Lord can you hear me speak!!
To pay the price of being hell bound...
Tags: 2009, faith, poetry, religion
Subscribe