What is Cancer? A confusing amount of Things...

Come In!
Come In!

I've always been interested in Cancer...LOL...It's interesting how it has been in Mythology and it's the opposite of my Astrological symbol Capricorn.  So I thought I would put up some info about it

Jump to: navigation, search
For other uses, see Cancer (disambiguation).

Cancer (medical term: malignant neoplasm) is a class of diseases in which a group of cells display uncontrolled growth (division beyond the normal limits), invasion (intrusion on and destruction of adjacent tissues), and sometimes metastasis (spread to other locations in the body via lymph or blood). These three malignant properties of cancers differentiate them from benign tumors, which are self-limited, do not invade or metastasize. Most cancers form a tumor but some, like leukemia, do not. The branch of medicine concerned with the study, diagnosis, treatment, and prevention of cancer is oncology.

Cancer may affect people at all ages, even fetuses, but the risk for most varieties increases with age.[1] Cancer causes about 13% of all deaths.[2] According to the American Cancer Society, 7.6 million people died from cancer in the world during 2007.[3] Cancers can affect all animals.

Nearly all cancers are caused by abnormalities in the genetic material of the transformed cells[citation needed]. These abnormalities may be due to the effects of carcinogens, such as tobacco smoke, radiation, chemicals, or infectious agents. Other cancer-promoting genetic abnormalities may be randomly acquired through errors in DNA replication, or are inherited, and thus present in all cells from birth. The heritability of cancers are usually affected by complex interactions between carcinogens and the host's genome. New aspects of the genetics of cancer pathogenesis, such as DNA methylation, and microRNAs are increasingly recognized as important.

Genetic abnormalities found in cancer typically affect two general classes of genes. Cancer-promoting oncogenes are typically activated in cancer cells, giving those cells new properties, such as hyperactive growth and division, protection against programmed cell death, loss of respect for normal tissue boundaries, and the ability to become established in diverse tissue environments. Tumor suppressor genes are then inactivated in cancer cells, resulting in the loss of normal functions in those cells, such as accurate DNA replication, control over the cell cycle, orientation and adhesion within tissues, and interaction with protective cells of the immune system.

Diagnosis usually requires the histologic examination of a tissue biopsy specimen by a pathologist, although the initial indication of malignancy can be symptoms or radiographic imaging abnormalities. Most cancers can be treated and some cured, depending on the specific type, location, and stage. Once diagnosed, cancer is usually treated with a combination of surgery, chemotherapy and radiotherapy. As research develops, treatments are becoming more specific for different varieties of cancer. There has been significant progress in the development of targeted therapy drugs that act specifically on detectable molecular abnormalities in certain tumors, and which minimize damage to normal cells. The prognosis of cancer patients is most influenced by the type of cancer, as well as the stage, or extent of the disease. In addition, histologic grading and the presence of specific molecular markers can also be useful in establishing prognosis, as well as in determining individual treatments

Cancer (pronounced /ˈkænsɚ/) is one of the twelve constellations of the zodiac. Its name is Latin for crab and it is commonly represented as such. Its symbol is

(Unicode ♋). Cancer is small and its stars are faint. It lies between Gemini to the west and Leo to the east, Lynx to the north and Canis Minor and Hydra to the south.

Cancer the crab, plays a minor role in the Twelve Labors of Hercules. While Hercules was busy fighting the multi-headed monster, Hydra, the goddess Hera, who did not like Hercules, sent the Crab to distract him. Cancer grabbed onto the hero's toe with its claws, but barely breaking the rhythm of his great battle with Hydra, Hercules crushed the crab with his foot. Hera, grateful for the little crustacean's heroic but pitiful effort, gave it a place in the sky.

Cancer is said to have been the place for the Akkadian Sun of the South, perhaps from its position at the winter solstice in very remote antiquity. But afterwards it was associated with the fourth month Duzu (June-July in the modern western calendar), and was known as the Northern Gate of Sun.[citation needed]

Showing but few stars, and its brightest stars being of only 4th magnitude, Cancer was often considered the "Dark Sign", quaintly described as black and without eyes. Dante, alluding to this faintness and position of heavens, wrote in Paradiso:

Then a light among them brightened,
So that, if Cancer one such crystal had,
Winter would have a month of one sole day.

For the novel by Henry Miller, see Tropic of Cancer (novel). 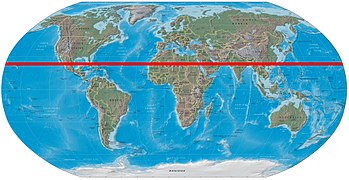 The Tropic of Cancer, or Northern tropic, is one of five major degree measures or major circles of latitude that mark maps of the Earth. It is the northernmost latitude at which the Sun can appear directly overhead at noon. This event occurs at the June solstice, when the northern hemisphere is tilted towards the sun to its maximum extent.

The imaginary line is called the Tropic of Cancer because when it was named the sun was in the direction of the constellation Cancer (Latin for crab) at the June solstice. However, this is no longer true due to the precession of the equinoxes. According to IAU boundaries, the sun now is in Taurus at the June solstice, and according to sidereal astrology, which divides the zodiac into twelve equal parts, the sun is in Gemini at that time. The word "tropic" itself comes from the Greek tropos, meaning turn, referring to the fact that the sun appears to "turn back" at the solstices.

The position of the Tropic of Cancer is not fixed, but varies in a complex manner over time; see under circles of latitude for information.

In a church by the face
He talks about the people going under
Only child knows...

A man decides after seventy years
That what he goes there for, is to unlock the door,
While those around him criticize and sleep...
And through a fractal on a breaking wall,
I see you my friend and touch your face again,
Miracles will happen as we dream

No no, we'll never survive unless, we get a little bit...