Lesson 5 - The Buddha: "People with opinions just go around bothering each other." 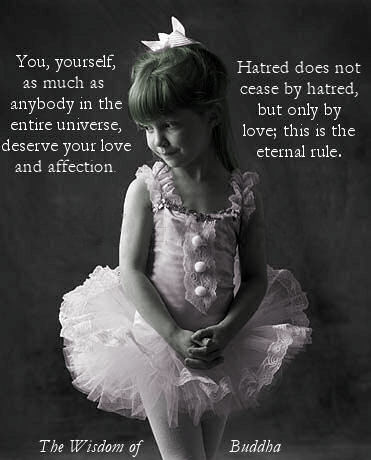 Mahayana Buddhism puts great emphasis and, in fact, encourages anybody to follow the path of a Bodhisattva.

Bodhisattva means either "enlightened (bodhi) existence (sattva)" or "enlightenment-being" or, given the variant Sanskrit spelling satva rather than sattva, "heroic-minded one (satva) for enlightenment (bodhi)". Another translation is "Wisdom-Being".[86]

The various divisions of Buddhism understand the word Bodhisattva in different ways. Theravada and some Mahayana sources consider a Bodhisattva as someone on the path to Buddhahood, while other Mahayana sources speak of Bodhisattvas renouncing Buddhahood[87][88], but especially in Mahayana Buddhism, it mainly refers to a being that compassionately refrains from entering nirvana in order to save others. So the Bodhisattva is a person who already has a considerable degree of enlightenment and seeks to use their wisdom to help other sentient beings to become liberated themselves.

While Theravada regards it as an option, Mahayana encourages everyone to follow a Bodhisattva path and to take the Bodhisattva vows. With these vows, one makes the promise to work for the complete enlightenment of all sentient beings.

A famous saying by the 8th-century Indian Buddhist scholar-saint Shantideva, which the Dalai Lama often cites as his favourite verse, summarizes the Bodhisattva's intention (Bodhicitta) as follows: "For as long as space endures, and for as long as living beings remain, until then may I too abide to dispel the misery of the world."

According to the Mahayana, a Bodhisattva practices in the six perfections: giving, morality, patience, joyous effort, concentration and wisdom.

Refuge in the Three Jewels

Traditionally, the first step in most Buddhist schools requires taking refuge in the Three Jewels (Sanskrit: tri-ratna, Pāli: ti-ratana)[90] as the foundation of one's religious practice. The practice of taking refuge on behalf of young or even unborn children is mentioned[91] in the Majjhima Nikaya, recognized by most scholars as an early text (cf. Infant baptism). Tibetan Buddhism sometimes adds a fourth refuge, in the lama. In Mahayana, the person who chooses the bodhisattva path makes a vow or pledge, considered the ultimate expression of compassion.

The Three Jewels are:

According to the scriptures, Gautama Buddha presented himself as a model. The Dharma offers a refuge by providing guidelines for the alleviation of suffering and the attainment of Nirvana. The Sangha is considered to provide a refuge by preserving the authentic teachings of the Buddha and providing further examples that the truth of the Buddha's teachings is attainable.

Śīla (Sanskrit) or sīla (Pāli) is usually translated into English as "virtuous behavior", "morality", "ethics" or "precept". It is an action committed through the body, speech, or mind, and involves an intentional effort. It is one of the three practices (sila, samadhi, and panya) and the second pāramitā. It refers to moral purity of thought, word, and deed. The four conditions of śīla are chastity, calmness, quiet, and extinguishment.

Śīla is the foundation of Samadhi/Bhāvana (Meditative cultivation) or mind cultivation. Keeping the precepts promotes not only the peace of mind of the cultivator, which is internal, but also peace in the community, which is external. According to the Law of Karma, keeping the precepts are meritorious and it acts as causes which would bring about peaceful and happy effects. Keeping these precepts keeps the cultivator from rebirth in the four woeful realms of existence.

Śīla refers to overall principles of ethical behavior. There are several levels of sila, which correspond to "basic morality" (five precepts), "basic morality with asceticism" (eight precepts), "novice monkhood" (ten precepts) and "monkhood" (Vinaya or Patimokkha). Lay people generally undertake to live by the five precepts, which are common to all Buddhist schools. If they wish, they can choose to undertake the eight precepts, which add basic asceticism.

The five precepts are training rules in order to live a better life in which one is happy, without worries, and can meditate well.

The precepts are not formulated as imperatives, but as training rules that laypeople undertake voluntarily to facilitate practice.[92] In Buddhist thought, the cultivation of dana and ethical conduct will themselves refine consciousness to such a level that rebirth in one of the lower heavens is likely, even if there is no further Buddhist practice. There is nothing improper or un-Buddhist about limiting one's aims to this level of attainment.[93]

In the eight precepts, the third precept on sexual misconduct is made more strict, and becomes a precept of celibacy. The three additional precepts are:

What is called Buddhism in the west has been referred to in India (the teachings' place of origin) and the east generally for many centuries as buddha-dharma. This term has no sectarian connotations but simply means "Path of Awakening" and thus conforms to a universal understanding of dharma.

The Dharma is one of the Three Jewels of Buddhism of which practitioners of Buddhism seek refuge in (what one relies on for his/her lasting happiness). The three jewels of Buddhism are the Buddha (mind's perfection of enlightenment), the Dharma (teachings and methods), and the Sangha (awakened beings who provide guidance and support).

Another reference from the Agganna Sutta of the Digha Nikaya, says to his disciple Vasettha:

The Teaching of the Buddha also has six supreme qualities:

Knowing these attributes, Buddhists believe that they will attain the greatest peace and happiness through the practice of the Dhamma. Each person is therefore fully responsible for himself to put it in the real practice.

Here the Buddha is compared to an experienced and skilful doctor, and the Dhamma to proper medicine. However efficient the doctor or wonderful the medicine may be, the patients cannot be cured unless they take the medicine properly. So the practice of the Dhamma is the only way to attain the final deliverance of Nibbāna.

These teachings ranged from understanding karma (Pāli: kamma) (cause and effect) and developing good impressions in one's mind, to reach full enlightenment by recognizing the nature of mind.