It is sadness, grief, distress, and pain

I know that this anger is a sin

My enemies amass, an army of ghouls

Of disappointment, regret, and fury control me

The wrath is not other ghouls but deep in my soul

How may Control these deep feelings Free?

Let my brain boil and simmer like a pot?

Or I must change myself in my spirit

Indeed there is an express of peace, a lot

The wrath and fire will cool and my heart not hot 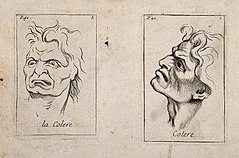 A drawing of faces expressing anger.

Anger or wrath is an intense emotional response. It is an emotion that involves a strong uncomfortable and hostile response to a perceived provocation, hurt or threat.[1]Anger can occur when a person feels their personal boundaries are being or are going to be violated. Some have a learned tendency to react to anger through retaliation as a way of coping. Raymond Novaco of University of California Irvine, who since 1975 has published a plethora of literature on the subject, stratified anger into three modalities: cognitive (appraisals), somatic-affective (tension and agitations), and behavioral (withdrawal and antagonism).[2] William DeFoore, an anger-management writer, described anger as a pressure cooker: we can only apply pressure against our anger for a certain amount of time until it explodes.[3]

Anger is an emotional reaction that impacts the body. A person experiencing anger will also experience physical conditions, such as increased heart rate, elevated blood pressure, and increased levels of adrenaline and noradrenaline.[4] Some view anger as an emotion which triggers part of the fight or flight brain response.[5] Anger is used as a protective mechanism to cover up fear, hurt or sadness. Anger becomes the predominant feeling behaviorally, cognitively, and physiologically when a person makes the conscious choice to take action to immediately stop the threatening behavior of another outside force.[6] The English term originally comes from the term anger of Old Norselanguage.[7] Anger can have many physical and mental consequences.

The external expression of anger can be found in facial expressions, body language, physiological responses, and at times public acts of aggression.[8] Animals, for example, make loud sounds, attempt to look physically larger, bare their teeth, and stare.[9] The behaviors associated with anger are designed to warn aggressors to stop their threatening behavior. Rarely does a physical altercation occur without the prior expression of anger by at least one of the participants.[9] While most of those who experience anger explain its arousal as a result of "what has happened to them," psychologists point out that an angry person can very well be mistaken because anger causes a loss in self-monitoring capacity and objective observability.[10]

Modern psychologists view anger as a primary, natural, and mature emotion experienced by virtually all humans at times, and as something that has functional value for survival. Anger is seen as a supportive mechanism to show a person that something is wrong and requires changing. Anger can mobilize psychological resources for corrective action. Uncontrolled anger can, however, negatively affect personal or social well-being[10][11] and impact negatively on those around them. It is equally challenging to be around an angry person and the impact can also cause psychological/emotional trauma if not dealt with. While many philosophers and writers have warned against the spontaneous and uncontrolled fits of anger, there has been disagreement over the intrinsic value of anger.[12] The issue of dealing with anger has been written about since the times of the earliest philosophers, but modern psychologists, in contrast to earlier writers, have also pointed out the possible harmful effects of suppressing anger.[12] Displays of anger can be used as a manipulation strategy for social influence.[13][14]

Wrath In eyes of fire boiling lava again Frustration and sore tempers begin the eruption It is sadness, grief, distress , and pain I know that this anger is a sin My enemies amass, an army of ghouls Of disappointment, regret, and fury control me The wrath is not other ghouls but deep in my soul How…

Wrath In eyes of fire boiling lava again Frustration and sore tempers begin the eruption It is sadness, grief, distress , and pain I know that this anger is a sin My enemies amass, an army of ghouls Of disappointment, regret, and fury control me The wrath is not other ghouls but deep in my soul How…