Flying to the teaching of Daedalus

Does he listen to the fears of his son?

This is the youthful bliss in the sun

But from the heights of the skies

The crafted father’s wings of wax

But Kid is based on beauty not precision

If only the lessons and warnings of Dad

Icarus is not a student or prudent

The mad and sad gloom for eternity

The wax melts into the sun fire

Both son and Father perspire in dire

What thoughts inside Icarus’s mind?

The wax melts and pain felt in a spiral dive

A father never is supposed to see this

His son young dead while his father is alive! 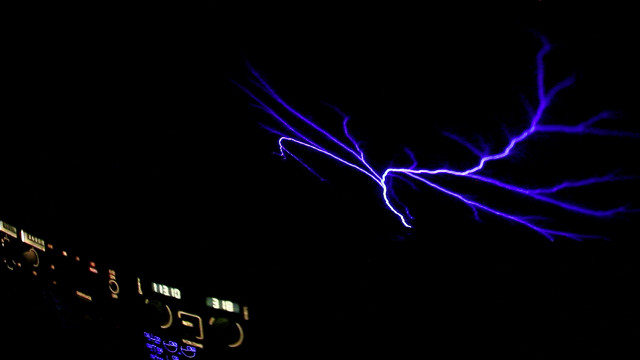 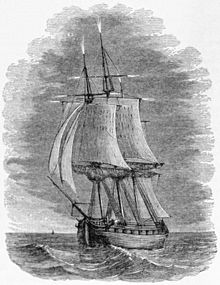 St. Elmo's fire on a ship at sea

St. Elmo's fire (also St. Elmo's light[1][2]) is a weather phenomenon in which luminous plasma is created by a coronal discharge from a sharp or pointed object in a strong electric field in the atmosphere (such as those generated by thunderstorms or created by a volcanic eruption).

St. Elmo's fire is named after St. Erasmus of Formia (also called St. Elmo, one of the two Italian names for St. Erasmus, the other being St. Erasmo), the patron saint of sailors. The phenomenon sometimes appeared on ships at sea during thunderstorms and was regarded by sailors with religious awe for its glowing ball of light, accounting for the name.[3]Sailors may have considered St. Elmo's fire as a good omen (as a sign of the presence of their patron saint).[4]

St. Elmo's fire is a bright blue or violet glow, appearing like fire in some circumstances, from tall, sharply pointed structures such as lightning rods, masts, spires and chimneys, and on aircraft wings or nose cones. St. Elmo's fire can also appear on leaves and grass, and even at the tips of cattle horns.[5] Often accompanying the glow is a distinct hissing or buzzing sound. It is sometimes confused with ball lightning.

In 1751, Benjamin Franklin hypothesized that a pointed iron rod would light up at the tip during a lightning storm, similar in appearance to St. Elmo's fire.[6][7]

St. Elmo's fire is a form of plasma. The electric field around the object in question causes ionization of the air molecules, producing a faint glow easily visible in low-light conditions. Conditions that can generate St. Elmo's fire are present during thunderstorms, when high voltage differentials are present between clouds and the ground underneath. A local electric field of approximately 100 kV/m is required to induce a discharge in air. The magnitude of the electric field depends greatly on the geometry (shape and size) of the object. Sharp points lower the necessary voltage because electric fields are more concentrated in areas of high curvature, so discharges preferably occur and are more intense at the ends of pointed objects.

The nitrogen and oxygen in the Earth's atmosphere cause St. Elmo's fire to fluoresce with blue or violet light; this is similar to the mechanism that causes neon lights to glow.[8]

In ancient Greece, the appearance of a single one was called Helene (Greek: Ἑλένη), literally meaning torch,[9] and two were called Kastor and Polydeuces[10] (names of the mythological twin brothers of Helen). Occasionally, it was associated with the Greek element of fire, as well as with one of Paracelsus's elementals, specifically the salamander, or, alternatively, with a similar creature referred to as an acthnici.[11]

References to St. Elmo's fire can be found in the works of Julius Caesar (De Bello Africo, 47), Pliny the Elder (Naturalis Historia, book 2, par. 101), Alcaeus frag. 34, and Antonio Pigafetta's journal of his voyage with Ferdinand Magellan. St. Elmo's fire, also known as "corposants" or "corpusants" from the Portuguese corpo santo[13] ("holy body"), was a phenomenon described in The Lusiads.

In 15th-century Ming China, Admiral Zheng He and his associates composed the Liujiagang and Chang-le inscriptions, the two epitaphs of the treasure voyages where they made a reference to St. Elmo's fire as a divine omen of Tianfei, the goddess of sailors and seafarers.[14]

The power of the goddess, having indeed been manifested in previous times, has been abundantly revealed in the present generation. In the midst of the rushing waters it happened that, when there was a hurricane, suddenly a divine lantern was seen shining at the masthead, and as soon as that miraculous light appeared the danger was appeased, so that even in the peril of capsizing one felt reassured and that there was no cause for fear.

— Admiral Zheng He and his associates (Chang-le inscription) [14]

Robert Burton wrote of St. Elmo's fire in his Anatomy of Melancholy: "Radzivilius, the Lithunian duke, calls this apparition Sancti Germani sidus; and saith moreover that he saw the same after in a storm, as he was sailing, 1582, from Alexandria to Rhodes". This refers to the voyage made by Mikołaj Krzysztof "the Orphan" Radziwiłł in 1582–1584.

On 9 May 1605, while on the second voyage of John Davis commanded by Sir Edward Michelborne to the East Indies, an unknown writer aboard the Tiger describes the phenomenon; "In the extremity of our storm appeared to us in the night, upon our maine Top-mast head, a flame about the bigness of a great Candle, which the Portugals call Corpo Sancto, holding it a most divine token that when it appeareth the worst is past. As, thanked be God, we had better weather after it".[15]

William Noah, a silversmith convicted in London of stealing 2,000 pounds of lead, while on route to Sydney, New South Wales on the convict transport ship Hillsborough, recorded two such observations in his detailed daily journal. The first was in the Southern Ocean midway between Cape Town and Sydney and the second was in the Tasman Sea, a day out of Port Jackson:

26 June 1799: At 4 Began to Blow very Hard with Heavy Shower of Rain & Hail and Extraordinary Heavy Clap of Thunder & Lightning when fell a Cormesant [corposant] a Body of Fire which collect from the Lightning & Lodge itself in the Foretopmast Head where it was first seen by our Captain when followd a Heavy Clap of Thunder & Lightning which occasioned it to fall & Burst on the Main Deck the Electrific of the Bursting of this Ball of Fire had such power as to shake several of their Leg not only On the Main Deck as the fire Hung much round the smith Forge being Iron but had the same Effect on the Gun Deck & Orlop [deck] on several of the Convicts.

25 July 1799: We were now sourounded with Heavy Thunder & Lightning and the Dismal Element foaming all round us Shocking to see with a Cormesant Hanging at the Maintop mast Head the Seamen was here Shock’d when a flash of Lightning came Burst the Cormesant & Struck two of the Seamen for several Hours Stone Blind & several much hurt in their Eyes.[16]

While the exact nature of these weather phenomenon cannot be certain, they appear to be mostly about two observations of St. Elmo's fire with perhaps some ball lightning and even a direct lightning strike to the ship thrown into the mix.