Trump - The Asshole in Chief

As a Canadian I am proud and I am so lucky to live in the best country.  In November 8, 2016 will be like a Judgement Day. Donald J Trump is a racist, sexist, liar, bigot, that has a hatred for an entire religion.  But Trump is unchristian and does not follow the words of Jesus.  He is like an antichrist that will have the most power of the majority of weapons and nuclear arms.  How angry and hateful to allow such a man may be the most powerful man of the world.  The ignorance of some of the american people are uneducated about many of subjects like the Bible, Constitution, Economy, Foreign Affairs. There are people like a: 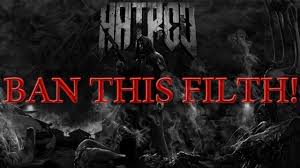 "...That’s one of the nice things. I mean, part of the beauty of me is that i’m very rich. That’s a huge advantage over the other candidates."

"...I will build a great, great wall on our southern border, and i will make mexico pay for that wall."

Re: Fiorina: "...look at that face! Would anyone vote for that? Can you imagine that, the face of our next president?! I mean, she's a woman, and i'm not s'posedta say bad things, but really, folks, come on. Are we serious?"

Re: John McCain: "...he’s not a war hero. He was a war hero because he was captured. I like people who weren’t captured."

"...You know, it really doesn’t matter what the media write as long as you’ve got a young and beautiful piece of ass."

"...The concept of global warming was created by and for the Chinese in order to make U.S. manufacturing non-competitive."

"...The only kind of people I want counting my money are little short guys that wear yamakas every day."