Why all the questions?  Do you belive in Heaven? Do you believe in God? What about are there aliens?

But I am an inquisitive person but I would like to question, learn and pray but mostly loving fun.

I'm just a humble Buddhist that teaches the 5 precepts and the 8 noble eightfold path. The love of knowledge and science started when I was very young.  At Grade 2 I was at my catholic school when I learned the Lord's prayer. I was given in academic challenge where I met intelligent students.  In grade 8 I won a school award about Knowledge, and I was given an Award  in Grade 9 as my Valedectorian.  In grade 10 I enrolled in one of the best academic schools in all of Canada.  I was given even more information and having met many friends at Old Scona Academic.  Many of my friends in high school meet every week and enjoy their time.  When I joined the University of Alberta in Engineering I was diagnosed bi-polar disorder and had to stay in Alberta Hospital.  I met good people from patients, nurses, and doctors that saved me from a death spiral and was understanding the mind and the kindness of strangers.  I joined to University studying Business and I was adept at Mathmatics and Statistics.  I had good grades but I still wanted something else I tried both primary and secondary education.  I enjoyed working with children and I was my first job at the YMCA in out of school child care.  Childcare unfortunately was as lucrative so started working in Insurance.  But I loved learning so I tried journalism and I enjoyed finding inquisitive students and sculpturing the language.

I question a lot of things since I was a child and it all asks "where is in my place in this world?"  I am learning that I can only hypothise and guess and estimate because these are all theories.  But I would look at theories that I believe as facts:

1) God is Everything and Nothing.  God has everything evolved but he doesn't change on Earth with technology, God changes our thoughts.  Our actions, thoughts, concentration are given in our mind that changes the world.  We can change the world with only thoughts.  This seems to be a paradox but you must believe that at the very beginning of time which encloses with String theory and the Big Bang.  God was at the moment of the Big Bang and even before the beginning of our universe.This is the most powerful force would exist til the destruction of the universe.  Thought is even more faster than time and it allows us to convert thought into energy.

Theory of relativity and E = mc²

Abiogenesis is the natural process of life arising from non-living matter, such as simple organic compounds. The age of the Earth is about 4.54 billion years.[6][7][8] The earliest life on Earth arose at least 3.5 billion years ago,[9][10][11]

The science of extraterrestrial life is known as exobiology. The science of astrobiology also considers life on Earth as well, and in the broader astronomical context. Meteorites that have fallen to Earth have sometimes been examined for signs of microscopic extraterrestrial life. In 2015, "remains of biotic life" were found in 4.1 billion-year-old rocks in Western Australia, when the young Earth was about 400 million years old.[3][4] According to one of the researchers, "If life arose relatively quickly on Earth ... then it could be common in the universe."[3]

3) What about world now? Why there is so many diseases, poverty, war in our world?  God has created starting the elements of building blocks of our universe from nothing till million years after 2015.  But humanity is like a child, it sufferieng from the birth, the weakness of old and it causes great pain of death.  But men have sinned like greed, wrath, gluttony, lust, envy, sloth, pride has caused changing the world.  There are many false prophets, and leaders that use power to cause religions use to not love but it causes pain.  There are so many liars that have caused their religion perverted.  Everyone would be having  a loving God, but the texts and religious world. God is omnipotent and knows everything and doesn't create miricles and magic.  Religions use power and make knowledge to betray it's followers.  There is stupid people who have Jihads or holy wars and crusades.  There are 5 main laws that everyone in humans should keep in your heart and mind. The most important law means we need to harm living beings, Don't Kill!!!

The Five Precepts (Pali: pañcasīlāni; Sanskrit pañcaśīlāni[1]) constitute the basic code of ethics undertaken by upāsaka and upāsikā ("lay followers") of Buddhism. The precepts in all the traditions are essentially identical and are commitments to abstain from harming living beings, stealing, sexual misconduct, lying and intoxication.

Undertaking the five precepts is part of both lay Buddhist initiation and regular lay Buddhist devotional practices. They are not formulated as imperatives, but as training rules that lay people undertake voluntarily to facilitate practice.[2] 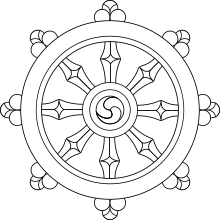 The Noble Eightfold Path—the fourth of the Buddha's Noble Truths—consists of a set of eight interconnected factors or conditions, that when developed together, lead to the cessation of dukkha.[33] These eight factors are: Right View (or Right Understanding), Right Intention (or Right Thought), Right Speech, Right Action, Right Livelihood, Right Effort, Right Mindfulness, and Right Concentration.

Ajahn Sucitto describes the path as "a mandala of interconnected factors that support and moderate each other."[33] The eight factors of the path are not to be understood as stages, in which each stage is completed before moving on to the next. Rather, they are understood as eight significant dimensions of one's behaviour—mental, spoken, and bodily—that operate in dependence on one another; taken together, they define a complete path, or way of living.[34]

The eight factors of the path are commonly presented within three divisions (or higher trainings) as shown below:

The Lord's Prayer, also called the Our Father and the Pater Noster,[1] is a venerated Christian prayer that, according to the New Testament, was taught by Jesus to hisdisciples. Two forms of it are recorded in the New Testament: a longer form in the Gospel of Matthew as part of the Sermon on the Mount