The Creation of God in the Digital Age

What do these digits represent in these days of infinity. They represent a guide to the beginning of sentient life, a guide to God. For one equals infinity, and zero the start. What if god killed himself? Well, there would be zero and he would quickly find himself reincarnated. And he would create Another God. A twin to annialate the loneliness that this mortal coil is hear to.

But the question remains is there one God? The answer depends on where in time you are. From nothing sprang God and God counted. God was the first to count and he counted until he could count no more and that took only 120 years. Then he died only to be reborn in the voices of his children. We are all God's children and we have only to count. You count as a God and so does an ant on the ground counting rice kernels.

So abandon your doubt, have faith in yourself and the miracles that surround us. We are the ones that create a home for God in our hearts. That is where he lives till the day we die and are reborn in heaven. And we shall all be laughing in heaven because we understood our purpose. The reason for our suffering in this life. All will be revealed like a man who wakes from a depression or sleep. 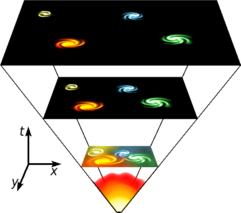 According to the Big Bang model, the Universe expanded from an extremely dense and hot state and continues to expand today. A common analogy explains that space itself is expanding, carrying galaxies with it, like spots on an inflating balloon. The graphic scheme above is an artist's concept illustrating the expansion of a portion of a flat universe.

The Big Bang theory is the prevailing cosmological model that explains the early development of the Universe.[1] According to the Big Bang theory, the Universe was once in an extremely hot and dense state which expanded rapidly. This rapid expansion caused the Universe to cool and resulted in its present continuously expanding state. The most recent measurements and observations are in agreement with a Big Bang that would have occurred approximately 13.75 billion years ago,[2][3] which is thus considered the age of the Universe.[4][5] According to the theory, after its initial expansion from a singularity, the Universe would have cooled sufficiently to allow energy to be converted into various subatomic particles, including protons, neutrons, and electrons. While protons and neutrons would have combined to form the first atomic nuclei only a few minutes after the Big Bang, it would then have taken thousands of years for electrons to combine with them and create electrically neutral atoms. The first element produced would then be hydrogen, along with traces of helium and lithium. Giant clouds of these primordial elements would then coalesce through gravity to form stars and galaxies, and the heavier elements would be synthesized either within stars or during supernovae.

The Big Bang is a well-developed scientific theory which is widely accepted within the scientific community because it offers an accurate and comprehensive explanation for a broad range of phenomena that astronomers observe. Since its conception, abundant evidence has arisen to further develop and strengthen the model.[6] Georges Lemaître first proposed what would become the Big Bang theory in what he called his "hypothesis of the primeval atom." Over time, scientists would build on his initial ideas to form the modern synthesis. The framework for the Big Bang model relies on Albert Einstein's general relativity and on simplifying assumptions such as homogeneity and isotropy of space. The governing equations had been formulated by Alexander Friedmann. In 1929 Edwin Hubble discovered that the distances to far away galaxies were generally proportional to their redshifts—an idea originally suggested by Lemaître in 1927. Hubble's observation was taken to indicate that all very distant galaxies and clusters have an apparent velocity directly away from our vantage point: the farther away, the higher the apparent velocity.[7]

As the distance between galaxy clusters is increasing today, the theory states that everything was closer together in the past. This idea has been considered in detail back in time to extreme densities and temperatures,[8][9][10] and large particle accelerators have been built to experiment on and test such conditions, resulting in significant confirmation and further development of this model. On the other hand, these accelerators have limited capabilities to probe into such high energy regimes. There is little evidence regarding the absolute earliest instant of the expansion. Thus, the Big Bang theory cannot and does not provide any explanation for such an initial condition; rather, it describes and explains the general evolution of the universe going forward from that point on. The observed abundances of the light elements throughout the cosmos closely match the calculated predictions for the formation of these elements from nuclear processes in the rapidly expanding and cooling first minutes of the universe, as logically and quantitatively detailed according to Big Bang nucleosynthesis. After the discovery of the cosmic microwave background radiation in 1964, and especially when its spectrum (i.e., the amount of radiation measured at each wavelength) was found to match that of thermal radiation from a black body, most scientists had become fairly convinced that some version of the Big Bang scenario best fit observations.